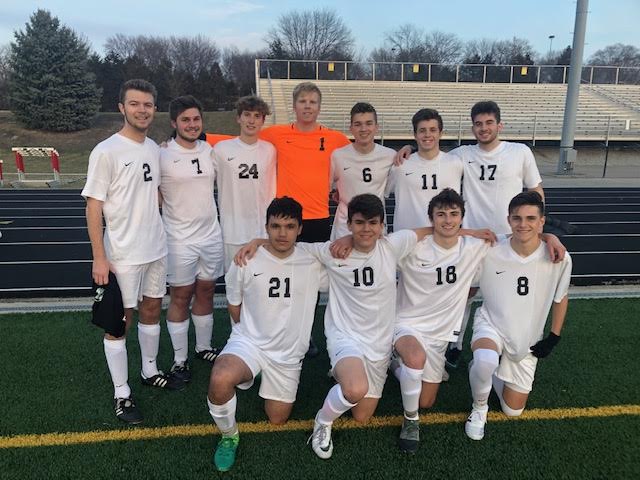 Rivalry games are always full of emotion, records get thrown out the door and a battle of will determines the victor. The Wildcats started on the front foot tonight, with a chance early on inside of a minute on a long cross from Caden Tubaugh to Braedan Evans that floated just over his head. The boys kept the majority of the possession through the half but it was actually Millard South that generated the best opportunity in the dying moments of the half when a shot from distance was blocked by Senior GK Sam Fedde who was diving to his left. He popped right back up and set himself for the rebound shot that came right back his way but Fedde was up to the task and a 1 handed instinct save kept it 0-0 at the end of the first half.
The Wildcats came out in the second half with a desire to go forward and it was Junior Daniel Gornell who found himself up the left side of the Millard South defense where he slotted a ball to the feet of Junior Nate Bauermeister who stepped over the ball to create a shooting opportunity and fired one at the keeper who saved the initial shot but was helpless against Bauermeister’s follow up and it was 1-0 just 4 minutes in. Bauermeister tallied his first goal of the year after racking up assists through the first 4 matches. From there, other than a late break by Senior Captain Braedan Evans and an attempt by Tubaugh late toward the middle of the box, there was not much other than solid spells of possession. Team defense kept the clean sheet and the back line was anchored by Junior Riley Hackbart and Senior Dan Zapata along with Fedde who ended the night with 7 saves and his second shutout on the year. Captain Andrew Hall was pivotal in the attack and the defense and he received support from Senior Zaki Alsharif, Gornell, Senior Trevor Green and Sophomore Nasser Nabulsi. Freshman Mitchell Baird logged his first minutes as a Wildcat at the Varsity level and Senior Jacob Shirley also entered the game late to help seal the victory. It was a solid team performance on the evening. Next up is Westside Thursday evening at Millard North HS at 5pm.

No Events This Week

Events are added by athletic staff.
View All Events